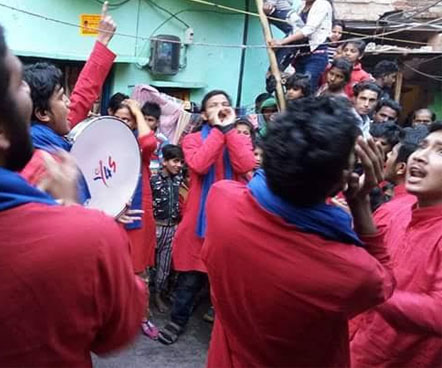 A platform to challenge the status quo and create new narratives to safeguard our fundamental values and ethos.

Nukkad Natak – a form of theatre that reaches your doorstep.

As cacophony of high octane publicity campaigns grow, and the print media has splash pages of political figures, the real issues that plague our society and democracy have been marginalized. It is time that creative medium be used to raise these issues.

History has enough evidence of creative media having been used as effective tools for creating public awareness. Starting from Prabhat Pheris to stage dramas to theatre and cinema, artists have contributed in nurturing and furthering revolutions.

Y4S has also adopted a resolve to bring about Cultural Revolution – a platform to challenge the status quo and create new narratives to safeguard our fundamental values and ethos. We have a team of enthusiastic young men and women who design and perform Nukkad Natak, Flash Mob, Music Club, Movie Club etc. The team is guided by renowned theatre and cinema artists, script writers who periodically help them to understand the art of creative medium.

The team has been an integral part of our campaigns and helped us convey the generic problems and probable solutions thereto. Some of the most noteworthy performances of the team are-

2. Performances during Samvedna Yatra: The young theatre group travelled with activists of Jai Kisan Andolan through drought struck states and performed for the rural India showcasing apathy of Government to the state of distressed farmers.

3. “Kaale Dhan par Halla Bol” : Nukkad team staged a performance at Jantar Mantar in a well attended protest rally that questioned the seriousness of government in its propounded fight against Black Money.

Let’s hear the voice of satire, drama, music and fun as the group grows and targets social and political issues.