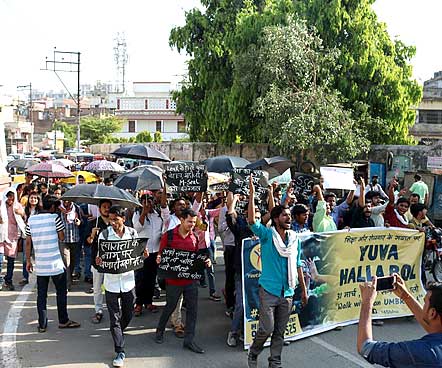 The path thus trodden in our pursuit of swaraj. Listen to the clarion call and make the shift.

Youth For Swaraj is striving for alternative politics in various ways. One of those ways is to expose corruption in exams through political discourse and movement. Our team has pursued the campaigns for students of various fields. Standing for corruption in DSSSB exam, CSAT exam, G.B.Pant Engg College infrastructure etc. We had been an important part of #OccupyUGC movement. Our National Convention of ‘Shiksha Swaraj’ has focused on the need of educational reforms. We stand firm against ‘privatization’ of educational institutions and fund cuts in scholarships programs. We demand ‘education’ to be an important and significant part of our national budget. Currently we are trying to unite all victims of exam corruption like SSC, MPSC, BPSC and other state exams. We are providing them a common platform for addressing their issue in an organized way. We want to establish the real issues of ‘unemployment’ and ‘education’ in our national agenda.

“What counts in life is not the mere fact that we have lived. It is what difference we have made to the lives of others that will determine the significance of the life we lead.” ~Nelson Mandela

Youth for Swaraj of Swaraj Abhiyan calls upon the privileged section of the society to come forward and be the voice of the farmers who have been denied the privilege of a debt-free life, the privilege of fair prices that they deserve for the hard work they put into farming.

In today’s times, our country is going through a major agricultural crisis with farmers submerged in debt. This crisis has reached such a level that everyday the news of farmers committing suicide comes from one part of the country or other. Farmers are living in such trying times that farmers who are feeding the nation are unable to feed their own families. And when they fail to pay their debts, they are subjected to such cruel defamation that they give up their lives.

Farmers have not only suffered during natural calamities like drought; After suffering from drought for two years, when the farmers witnessed a good yield this year, they are again faced with a situation where they are suffering from heavy loses. Added to this is the fact that on most occasions, the government has failed to purchase the crops that farmers have produced. The Kisan Mukti Yatra undertaken by nearly 184 farmers organization is on a country wide tour to reach out to distressed farmers and give them a collective voice. The Kisan Mukti Yatra is highlighting the failures of promises of the government at such times. This farmers movement has emerged as a ray of hope for the country and to keep this hope alive, the farmers need your support.

This fight is not just for saving farmers or farming. This is the fight of every citizen, every youth of this country. It is only when farmers and farming will survive that the country’s villages will be able to sustain. And only when the villages will be able to sustain, the cities can survive. And this inter-dependency makes this farmers’ fight a fight of every citizen in this country

Youth for Swaraj is running a campaign named “मैं भी किसान की संतान (बळीराजाच्यामुला)”. This campaign is an initiative to gather the voices and energy of the youth for the cause of farmers of this country. Through the Facebook Online Event “मैं भी किसान की संतान” campaign, thousands of youth have engaged with it. The youth of Delhi & across the country have taken an oath to not let the farmers commit suicide and have offered their support to the farmers’ movement.

Panchkula unit of Y4S initiated a unique drive “My Pothole, My Pride” in the city to highlight apathy of the administration to the pathetic state of city roads. The roads were marked by countless potholes that were a cause of accidents on a regular basis. Y4S volunteers started marking these potholes with chalk powder everyday as they drew smileys, figures, wrote slogans. The drive received appreciation not only from the city residents but also from the media. The drive also held a competition “My Pothole The Biggest – mera gaddha, sabse vadda”, and finally winners of this competition were announced.

The drive finally forced the administration to take note and finally the roads in the city are being constructed.