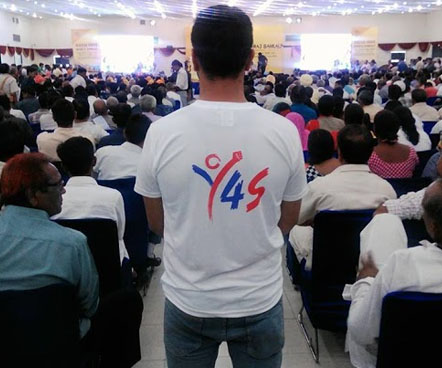 The Stage for confluence of individual thoughts and emergence of collective ideas on major national issues to pave the way ahead.

Under the guidance of Professor Anand Kumar, a Shiksha Swaraj Youth Convention was held at the Mavlankar Hall, Constitution Club in New Delhi on November 3, 2015. The Convention discussed problems afflicting education in our Nation, along with different ways forward to counter this regrettable state of the education system in the country. The Convention was attended by Prof. Anand Kumar, Yogendra Yadav, Ajit Jha, Prashant Bhushan, Patiala MP Dr. Dharamvira Gandhi, Timarpur MLA Pankaj Pushkar, DUTA President Prof. Nandita Narain, Prof. Chaman Lal and Anupam, along with students and youth representatives from various parts of the country.

Prashant Bhushan, in his remarks appreciated the work done by the Prof Yashpal committee, whose excellent recommendations on curriculum have unfortunately been implemented only in CBSE schools till date. He proposed that we should highlight the recent Allahabad High Court judgment directing that all public servants in the state should educate their children in Govt schools. He added that we should hold public hearings across the nation to highlight the state of Govt. schools and the percentage of political leaders’ and officers’ children who actually study there.

He mentioned the Vyapam scam as Exhibit-A illustrating how it is impossible to get a Govt job without paying a bribe today as all state PSCs have become completely corrupt. He demanded that selection of state public service commission members should be transparent and should be conducted by a duly constituted selection commission operating under defined norms, instead of on the whims of ruling politicians.

Timarpur MLA Pankaj Pushkar mentioned that half the students failed their board exams in Delhi last year. He criticized deputy CM Sisodia’s decision to chop off the school syllabus in senseless ways, thereby reducing the quality of education further for children of poor and deprived classes.

Swaraj Abhiyan co-founder Yogendra Yadav criticized today’s education system as an extremely unfair one, which is basically a pipeline for ensuring that children of the rich remain rich and children of the poor remain fit only for breaking stones as daily labours. He said that the truth of our education system is that 4 of 5 students never see the insides of a college and the differential treatment accorded to those educated in English and those educated in Indian languages is nothing short of apartheid. The greatest system of reservation in the nation today is the reservation in favor of children of the rich through the operation of private colleges operating through high tuition and capitation fees.

He added that the Allahabad HC judgment directing Govt officials to compulsorily educate their own children in Govt schools exposes the hypocrisy and fraud being conducted in this country. If you had asked the UP Govt about the quality of their schools six months ago, they would have answered that it is excellent and one of the very best. But let us ask them the same question one month hence, after they have done everything in their power to keep their own children out of the selfsame schools, and they will answer that that they are indeed terrible.

The convention concluded at 5:00pm after which all participants marched to UGC in solidarity of “Occupy UGC” movement. It was then announced that Yogendra Yadav would sit on protest for the night outside the UGC office.

The Convention was interspersed by a musical performance by Raghu Ram of the band Indian Ocean.